Twenty-year-old Rasaan is very goal oriented. It’s a trait that not only carries him through life, but through his healthcare as well.

Thinking back to his childhood, Rasaan remembers he came to CDTC around age six or seven. But, his time at the Center was broken up when two years later his family moved to New York. When they returned to South Florida in 2015, he felt a familiar connection to the brightly decorated CDTC lobby and the friendly staff.
Like many children with sickle cell, childhood was a challenge. He had to be extra cautious when playing with others. He would sometimes miss out on activities because of hospitalizations.

Rasaan’s diagnosis helps shape his days. There are lots of appointments to specialists and therapists. He tries to keep physically active throughout the day, even when just hanging out at home. He also puts a lot of effort into connecting with friends and family for his mental health. Of course, there’s also eating right and staying hydrated, which is important to his health.

Luckily, Rasaan has a special determination. His diagnosis would not stop him from reaching his goals. He would not stop living life. He shares, “If you want to do something, there’s always a way to do it.”

Part of his success comes from accepting the support of his CDTC Care Team. Rasaan knows that Dr. Robinson, his Care Coordinator Shelby, and the rest of his team offer a personal touch that he never experienced in New York.

They are always there to help him prioritize and manage his health. He even acknowledges Ms. Joy in Medical Records, who worked so hard recently to get him medical documentation he needed. Rasaan knows his team will see him through his most challenging crisis.

“Rasaan is such a bright and enthusiastic young man,” shares his Care Coordinator Shelby. “It is such an honor to not only work with him, but learn from him as well. He is always so positive and never complains despite the challenges he faces.“

Shelby is also impressed that Rasaan is so in tune with his body and knows when something is wrong. A couple of months ago, Rasaan was not feeling well and took a nap. When he woke up, he noticed he was having trouble trying to talk. This did not feel like his normal crisis. He and his grandmother immediately called CDTC for advice.

Rasaan ultimately helped saved his own life by noticing this was not a normal symptom and did not dismiss it. Thanks to the trust and quick response of his team, he was able to get medical treatment for an unruptured aneurysm at Broward Health Medical Center.

Today, Rasaan is working on his Associates Degree at Broward College with plans to major in biology with a specialization in veterinary medicine. His love of animals has developed into his next goal of becoming a vet tech or zoologist.

Make a Donation to Provide Medical Care for CDTC Kids 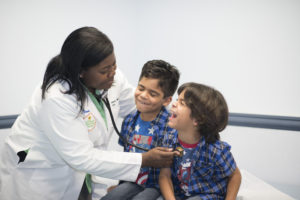 Children’s Diagnostic & Treatment Center, Inc. is recognized as a 501(c)3 organization and registered with the State of Florida as a charitable organization. Registration #CH14163.
A COPY OF THE OFFICIAL REGISTRATION AND FINANCIAL INFORMATION MAY BE OBTAINED FROM THE DIVISION OF CONSUMER SERVICES BY CALLING TOLL-FREE, WITHIN THE STATE, 1-800-HELP-FLA (435-7352), OR VIA THE INTERNET AT WWW.FloridaConsumerHelp.com. REGISTRATION DOES NOT IMPLY ENDORSEMENT, APPROVAL, OR RECOMMENDATION BY THE STATE.